The two top leaders of Queen City Angels (QCA), along with several members of the Cincinnati-based organization, spent more than two days in Knoxville last week sharing their knowledge, learning more about the local start-up scene, and exploring how to help grow more angels in the community.

Tony Shipley, QCA Chairman, President and Co-Founder, and Scott Jacobs, QCA Executive Director, led the delegation that hosted an all-day “Entrepreneurship Bootcamp” on Wednesday, a morning discussion about how QCA operates for prospective members on Thursday, and a pitch event Thursday afternoon with the six start-ups that comprise the new “Spark Cleantech Accelerator.”

Shipley, who is the immediate Past Chair of the national Angel Capital Association, is also a University of Tennessee (UT), Knoxville alum, graduating in 1969 with his B.S. in Industrial Engineering. That connection helps as does the fact that QCA has two local members – John Bruck, who joined soon after selling his Cincinnati-based engineering firm nearly a decade ago, and Carol Seamons, who joined in the past few months. They are also leading the new accelerator that is based at the UT Research Park. 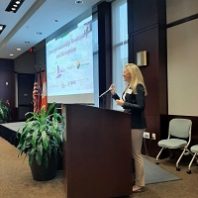 The all-day “Entrepreneurship Bootcamp,” hosted by the UT-Oak Ridge Innovation Institute (UT-ORII), drew around 40 people, most in-person with a handful online. The attendees ranged from members of the “Spark Cleantech Accelerator” – mandatory attendance, I suspect – to local entrepreneurs at varying stages of growing their companies. Partners in hosting the event were the UT Spark Innovation Center, “Innovation Crossroads”program operated by Oak Ridge National Laboratory, and the Tennessee Advanced Energy Business Council.

Jacobs noted that QCA has hosted 22 Bootcamps involving 738 participants since its founding and Wednesday’s program was fairly typical in terms of content. There were sessions on: 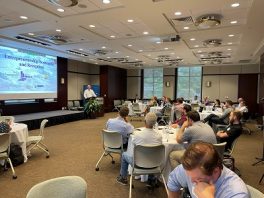 Bruck speaking at beginning on Bootcamp.

Over the next several days, we will have short articles summarizing key points that we gleaned from the presentations.

On Thursday morning, there was an invitation only event focused on explaining QCA, how it operates, how it differs from some other angel groups, and membership options. The session was another in an ongoing series of events to try to grow the Knoxville region’s angel base. Just two days earlier, Catherine Porth, Founder of Let Her Speak, hosted the first two sessions in a three-part series under the “Women’s Capital Series” banner that is focused on women needing to raise capital for their start-ups and women interested in investing in those ventures (see teknovation.biz wrap-up article here). And, the Knoxville Chamber concluded its three-session “Opportunities on the Horizon” series focused on addressing the angel capital deficit in the community in late March.

During the roughly three-hour session, two Tennessee-based start-ups that have received QCA funding described their companies. One was Active Energy Systems, a member of Cohort 1 of the “Innovation Crossroads” program that recently announced a $1 million first close on a seed funding round that included QCA (see teknovation.biz article here). The other was Memphis-based ConveyMD that we spotlighted last September in this teknovation.biz post.

The final stop for the QCA visitors was the UT Research Park where they heard from the six start-ups participating in the inaugural “Spark Cleantech Accelerator.”